The term pulp fiction was used for popular, creative writing magazines that were being sold during the early 20th century. Their name is due to the cheap, pulp paper that they were printed on and the magazines were crammed with exciting stories aimed at providing audiences with experiences, beyond the scope of their normal lives. Pulp magazines were the beginning of many great authors’ careers and became a huge influence on entertainment for many decades. As the successor to penny dreadfuls and dime novels, they gave creative writers the freedom to express themselves in a way that had previously been very restricted. This freedom created new genres and growing interest in reading among the population.

Even though the magazines were cheaply printed with an average of 128 pages each and ragged edges, they had intricately detailed covers and pictures throughout their interior. In the same way that these magazines made authors famous, they also helped to move along many painters’ careers. The magazines’ sales peaked in the 1930s and newsstands would be covered with them. The covers were painted with beautiful damsels in distress, normally with a handsome hero coming to her rescue. This appealed to audiences who wanted to get away from the monotony of everyday life, in a time before television had become wide spread.

To keep the magazines cheap, the publishers’ underpaid writers and printed them in large quantities, selling each for between a dime and fifteen cents. The low prices attracted people of the working class as well as teenagers and young adults. With the beginning of WWII, there came a decrease in the popularity of the magazines due to a rise in the price of paper and the intrigue of real life horror.

Even though their production had declined, pulp fiction magazines dictated the progression of creative writing and some of them evolved into comics and digests, such as Reader’s Digest and Alfred Hitchcock. Many modern-day comic book heroes are considered the descendants of those in pulp magazines, with the popular character Zorro being one of the first to appear in pulp fiction and evolve into an ongoing story.

The three most popular genres in pulp fiction were westerns, romances and detective stories. Each had sub-categories which developed over time. Publishers also began creating genre specific magazines, which were normally released on a weekly basis. Western pulp fiction was packed with images of cowboys and outlaws, gunslingers, delicate damsels in distress and Native Americans. Many of the stories were incredibly violent and prejudicial, and portrayed the Wild West as a world of its own. Some of the pulp fiction magazines which were dedicated to the western genre were: 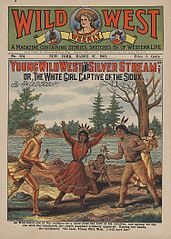 First printed as a dime novel on October 24, 1902, Wild West Weekly became a pulp magazine on August 13, 1927. The publication was very popular and had 824 issues before its final one in November 1943.

As a leader in pulp fiction publishing, Street and Smith introduced this all-western magazine on July 12, 1919. Western Story Magazine was the updated version of the dime novel, New Buffalo Bill Weekly. It also cost 10 cents and promised the reader ‘big, clean stories of outdoor life.’ The magazine lived up to this for the three decades that it was published, and became one of the biggest platforms for promising western authors. The most prolific of these was Fredrick Faust, using several pseudonyms including Max Brand, whose first story appeared in the magazine on November 15, 1920. He continued to write up to three stories per issue, for at least the next 12 years.

By the end of the 1920s, the magazine began to lose popularity due to competition from more graphic ones, such as West, Wild West Weekly and Lariat Story Magazine. These publications violently displayed the lives of cowboys. Western Story Magazine lowered their price back to a dime in 1932, to keep up. By 1944, they began publishing once per month instead of weekly and finally closed their doors in 1949.  An effort was made to revive the popular magazine in 1952, which lasted for two years, until June ‘54. During its lifetime, Western Story Magazine published 1274 issues.

A combination of the genres romance and western, Ranch Romances was very popular with readers and enjoyed a successful 47-year run beginning in September 1924 through to November 1971. Fanny Ellsworth was the editor for more than 25 years, and the magazine went through three different publishers. Unlike many of the other pulp fiction magazines Ranch Romances continued to be popular during The Great Depression, probably due to the characters in its stories. Each one contained at least one of two types of women; ‘your sister,’ an independent, impulsive heroine or ‘nobody’s sister,’ exactly the opposite.

The magazine was originally published twice per month until 1958, when they tried monthly and then bi-monthly issues. The editor finally settled for quarterly publications from 1959-71, to maximise profits. It was also kept in the original pulp magazine format until its size decreased in the final decade of its release. Many of these smaller editions contained reprints of the magazines original stories.

Even though the magazine itself was extremely popular, most of its authors have been forgotten as they were less well-known at the time. The stories were not a part of a series, which was also very different from other pulp magazines. This meant, however, that the magazine strived from variety allowing it to outlive others. The editions are also very popular collectors’ items, especially by modern, independent females who can relate to the iron-willed heroines in many of their pages.

Even though not popular with readers today, many books about western pulp fiction and the intrigue it held for audiences are available. With the number of copies and editions that were printed pulp magazines are very popular collectors’ items, and they continue to be displayed in various museums world-wide.