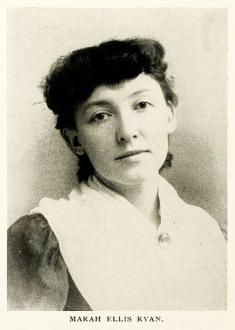 Marah Ellis Ryan was an American author who was born on February 27, 1860 in Butler County, Colorado, to parents Graham and Sidney Mechlin Martin. Her early writing was published under the pen name ‘Ellis Martin,’ and her later stories mostly about the Native Americans. In addition to being a storyteller Marah was also an actress and activist for these indigenous people. In 1883, she married Irish actor and comedian, Samuel Irwin Ryan

Her obsession with the Native Americans led her to live with the Hopi Indians, where she became an authority on tribal life in the United States and Mexico. Until the time of her death, she was believed to be the only Caucasian woman to witness their secret religious practices. On July 11, 1934, Marah Ellis Ryan died from encephalitis, swelling of the brain, at her home in Silver Lake District.